In the world of virtualization and connectivity, the virtual switch is one of the most fundamental components, providing networking connectivity between virtual machines, along with connecting them to the physical world.

Before we begin, let us quickly go over the key VMware networking elements:

Below shows each of the components (described above): 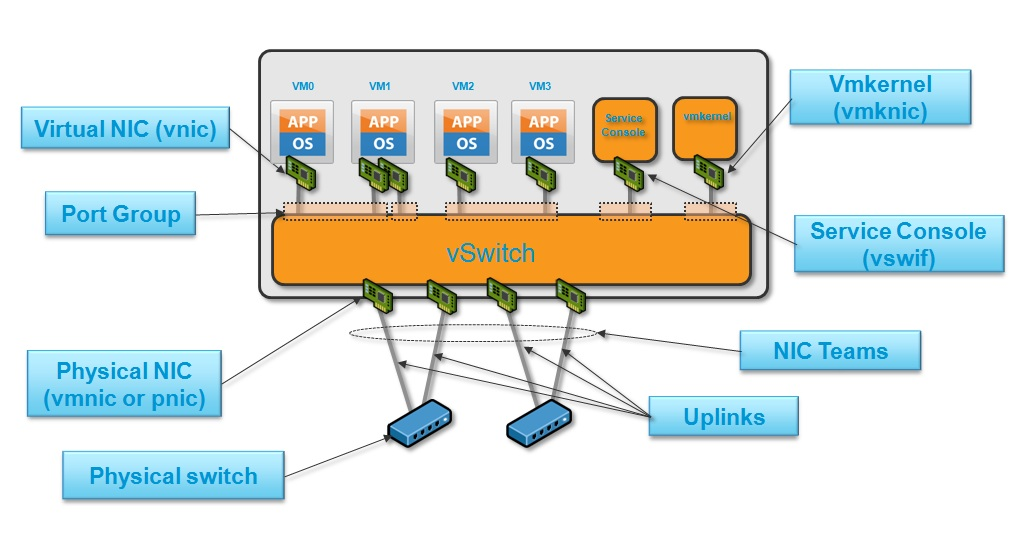 In addition, below is the output from an ESXi host with a standard switch configured. You can see the port groups, the VMNIC and also the VMKernel port used for management. 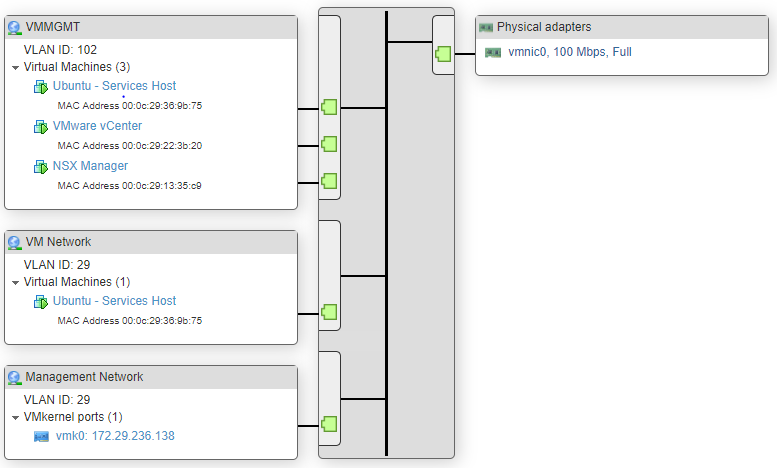 A vSS (virtual Standard Switch), provides the basic functions of a physical switch, i.e it works at layer 2 and provides frame forwarding based upon MAC addresses. In addition, the vSS provides features such as NIC teaming, security and traffic shaping. Standard switches are configured at the host level, meaning that you must create and manage vSphere Standard Switches independently on each ESXi host.[2]

Network Failover Detection is used to define the mechanism that is used to signal to ESXi when traffic should failover to the other link. The options are:

The Load Balancing configuration defines how traffic is distributed across multiple active VMNICs. The options include:

vSwitches provide a range of security configuration options. These security settings can be applied at either the virtual switch or port group level. Let us look at the different options:

Let us take a moment to talk about spanning tree.
Because we know that a vSwitch will be connected to the end host (VM), VMware's implementation of the vSwitch results in there being no need for the Spanning Tree Protocol. As per VMware :

VMware infrastructure enforces a single-tier networking topology within the ESX Server. In other words, there is no way to interconnect multiple virtual switches; thus, the ESX network cannot be configured to introduce loops. Because of this, the vSwitch on the ESX host does not execute the Spanning Tree Protocol (STP).

For example, as the physical uplink, NICs are not bridged like a normal physical switch. Also, a (broadcast) frame will never travel through one uplink pNIC and then be sent out to the other uplink pNIC. Instead, it will only be forwarded to the VMs of that port group.[4]

For a full breakdown and more details around this point, please see http://blog.ipspace.net/2010/11/vmware-virtual-switch-no-need-for-stp.html

Distributed vSwitches bring the key advantage of scalability, whilst also providing a number of additional features to the standard virtual switch.

This provides the advantage of only having to define the uplinks, port group, and vlans just once (within the vCenter), therefore reducing time and human error; negating the need to apply the configuration one by one to each ESXi host.

Note: the vDS model operates based on hidden switches being deployed to each ESXi host. vCenter then configures these switches against the vDS configuration applied. 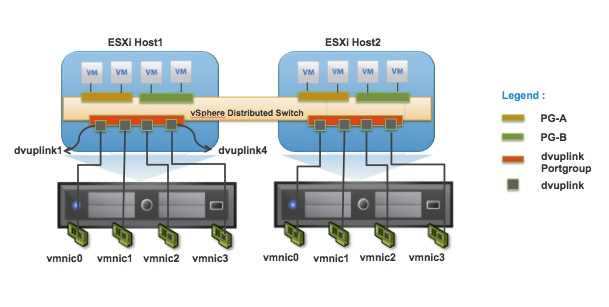 In addition to the features provided by the standard vSwitch, distributed vSwitches also adds the following key features:

A logical switch is a switch, which runs on top of a vDS (via a kernel module) to provide VXLAN capability. VXLAN provides tunneled transport over a physical network (also known as the underlay) via UDP port 8472. This tunneling, therefore, negates the need to reconfigure the physical network each time a new segment is required.

A VTEP (a VMkernel port) is assigned to each physical adapter. The VTEP is responsible for the encapsulation and decapsulation of traffic to and from the VXLAN tunnel.

With this encapsulation, an additional 50 bytes of overhead is added, pushing the minimum MTU required for VXLAN traffic to 1600 bytes.

Each VXLAN segment is defined with a VNI (VXLAN Network Identifiers), similar to a VLAN IDs that are added within the VXLAN header at the point of encapsulation. However, the key advantage to VNIs over VLANs is that you can have up to 16 million IDs! It is also worth noting that VNIs start at 5000 to prevent any confusion to VLAN ID assignments.

A Transport Zone defines a collection of ESXi hosts that can communicate with each other across a physical network infrastructure.
This communication happens over one or more interfaces defined as VXLAN Tunnel Endpoints (VTEPs).[7]

When BUM (broadcast, unknown unicast and multicast) traffic is sent out from a VM, the source VTEP must be replicated this traffic out to the other VTEPs via VXLAN encapsulation.