Within this article, we answer the question - What is Segment Routing (SR)?
But before we do we should first review MPLS, to understand the key benefits that SR brings.

Before looking at segment routing it's good to understand traditional MPLS.

With traditional MPLS, a component is known as the FEC (Forward Equivalence Class) table binds/groups a set of packets with similar or identical characteristics (such as IP destination) which may be forwarded the same way; that is, they may be bound to the same MPLS label.[2]

A label distribution protocol (MPLS uses LDP, MPLS-TE uses RSVP-TE) then maps this label through the MPLS core to each of the routers. This is known as the Label Switched Path (LSP).

Traffic is then switched across the MPLS core based on the ingress label. Each node removes the label at ingress and then pushes the new egress label and switches/forwards on accordingly until the traffic exits the MPLS core, where the label is popped (removed), and the IP packet forwarding is resumed.

However, there are some disadvantages to this model:

Segment Routing simplifies MPLS. It provides source-based routing, allowing the source to choose a path, which is then added to the packet header as an ordered list of segments. The rest of the network executes the encoded instructions. All of which is done without keeping any state within the network, i.e label distribution protocols are no longer required.

Therefore SR eliminates some of the downfalls of traditional MPLS, such as

First, what is a Segment?

Segments are the identifier for any type of instruction. Each segment is identified by the Segment ID (SID) consisting of a flat unsigned 32-bit integer.[1]

In addition, as we previously mentioned, state is removed from the network. This is because labels are no longer assigned on a per LSP basis, but instead on a per segment basis. As shown below.

Segment Routing is based upon 4 key segments:

A pool of global labels are defined (the SRGB aka SR Global Block), each label is then assigned to each node. The IGP (ISIS/OSPF) then signals each of these assigned labels within the SR domain, so that each node has the shortest path within its MPLS table to the given prefix.

For example, based on the diagram, if node 5 is assigned the SRGB label of 16005. If node 1 pushes the label 16005 to the top of its label stack, the packet will be switched via the shortest path (via node 6) to node 5. 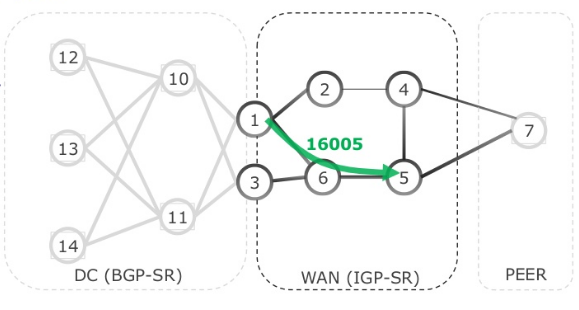 Unlike the IGP prefix segments, the IGP adjacency segments are dynamically generated/assigned. When a node discovers a neighbour, the node will automatically assign a label for the adjacent link. The label format is 1XY – X is the "from" – Y is the "to", as shown below. 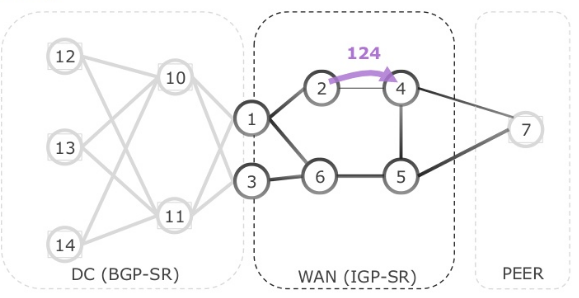 The BGP prefix segment is similar to the IGP prefix in that a global block (SRGB) of labels are defined and assigned to each node, which is then advertised throughout the fabric via an extension to BGP. 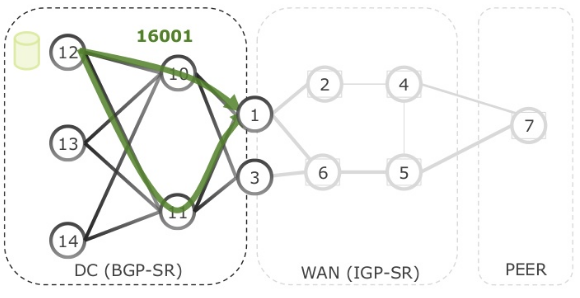 The final segment is the BGP peering segment, which as the name suggests 'addresses' the peering links. When the routers within the WAN discover a peer then automatically assign a label, which is assigned to its MPLS data plane. In essence, this is the same as the IGP adjacency segment but applied to BGP. 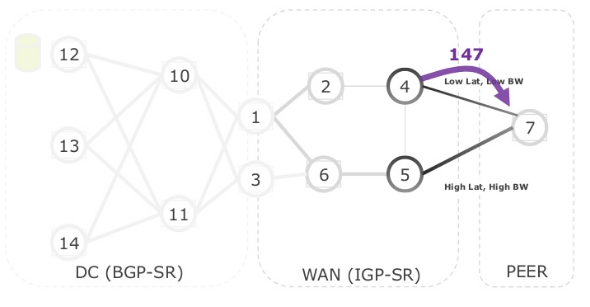 The final component to SR is the centralized controller (aka SDN controller). The controller receives the topology and segment information from the network via BGP-LS, in turn resulting in the SDN having a complete global picture of all the networks.

The computed resulted is then sent to the network nodes (aka PCC, Path Computation Client). The southbound protocol from the controller (PCE) to the client (PCC) is in fact immaterial. The standard model for PCE is to use PCEP as the southbound protocol. However, there are implementations where OpenFlow, when using white-box devices within the core. An example of this is Lumina's (based upon OpenDayLIght) SD-Core offering.

Now, this is where it all comes together - Application Engineered Routing.

With the controller having a complete understanding of the network, the application signals to the controller that would like to send traffic but it has a low-latency requirement.

The controller then computes the best path for the application to take, based on this requirement. In the case of our example below, this results in the lowest latency peer link being used, which in turn dictates the best path through the DC and WAN.

The packet is then switched through the network, each node that it transverses the relating label is popped from the stack until the packet finally makes it to its destination. 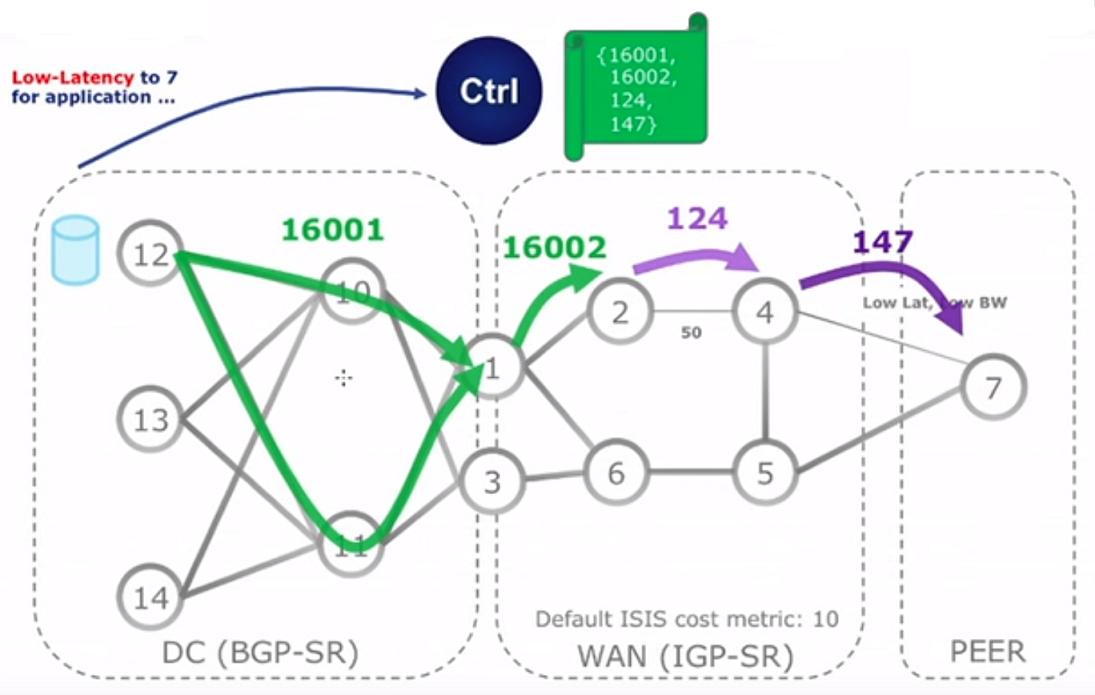