In the 1st part of this series we manipulated containers from the command line, and while that is useful editors and IDEs provide integration of application development with docker. In this section, I will show how to use Visual Studio Code and its Docker integration for Python development.

You will need the Remote - Containers extension and preferably the Docker extension to manage your images and containers. This lets you use a Docker container as a full-featured development environment since it allows you to open any folder inside (or mounted into) a container and take advantage of Visual Studio Code features.

Attaching to an Existing Container

Following on from the previous examples and the container that we previously built and ran, we need to open a new VSCode window and select the docker extension. Like so: 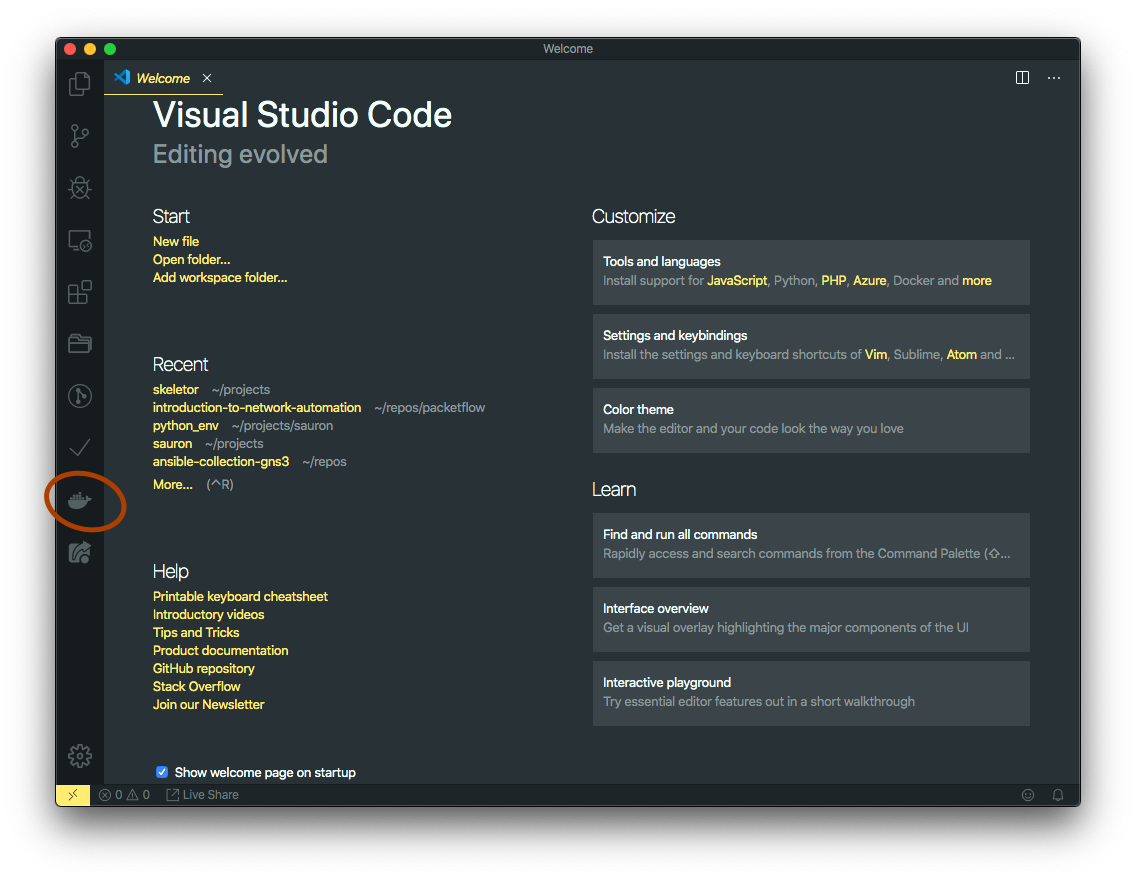 Now you will be presented with a view of the images and containers within your environment. 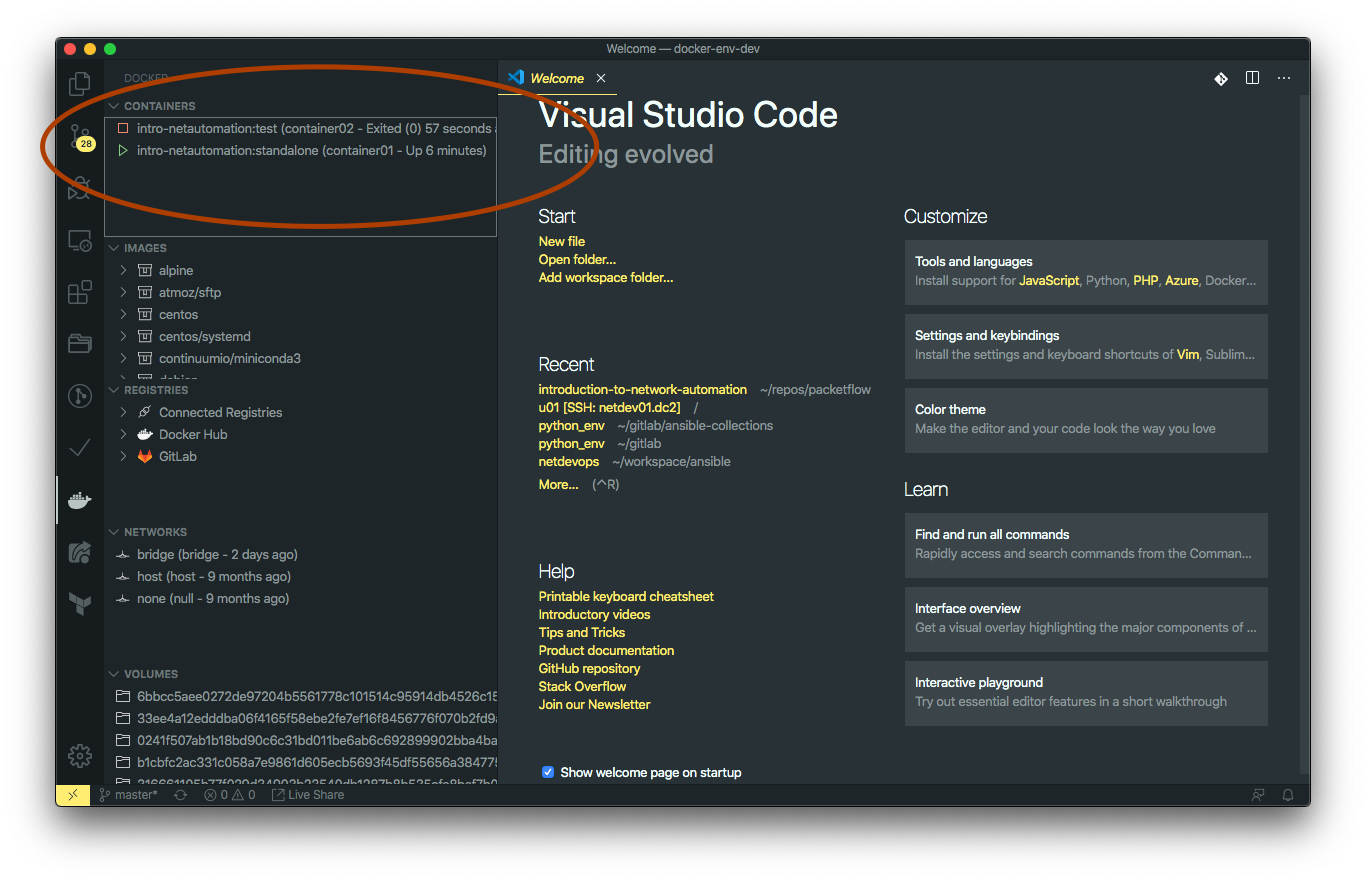 We can see the container01 listed, right-click and select “Attach Visual Code Studio”. This will open a new window, and start the process of syncing the editor and extensions with container01.

You can now open a new terminal, which will open up the shell of the running container. 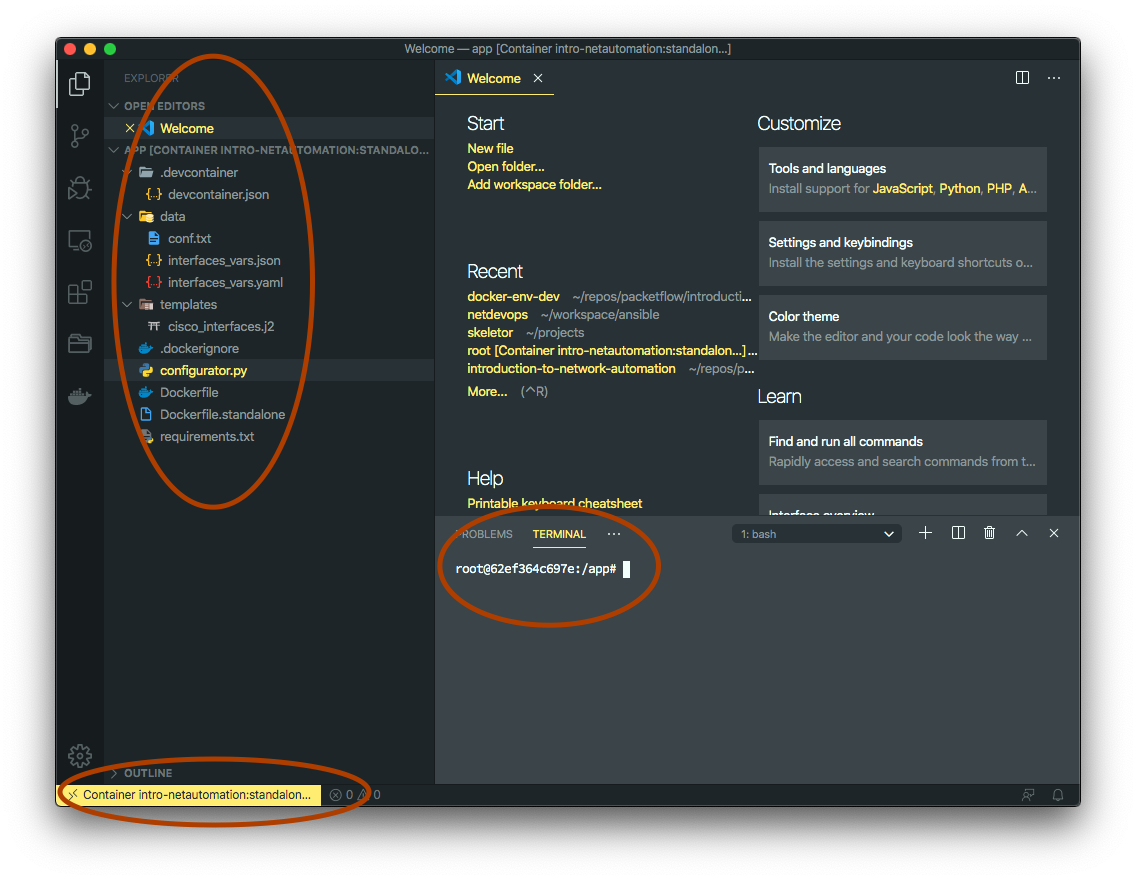 Also, you can see the .devcontainer directory. Do not pay attention to that yet, we will review it in the next section.

Let’s try modifying our app by adding a string of Inside container01!! when creating a conf.txt file. 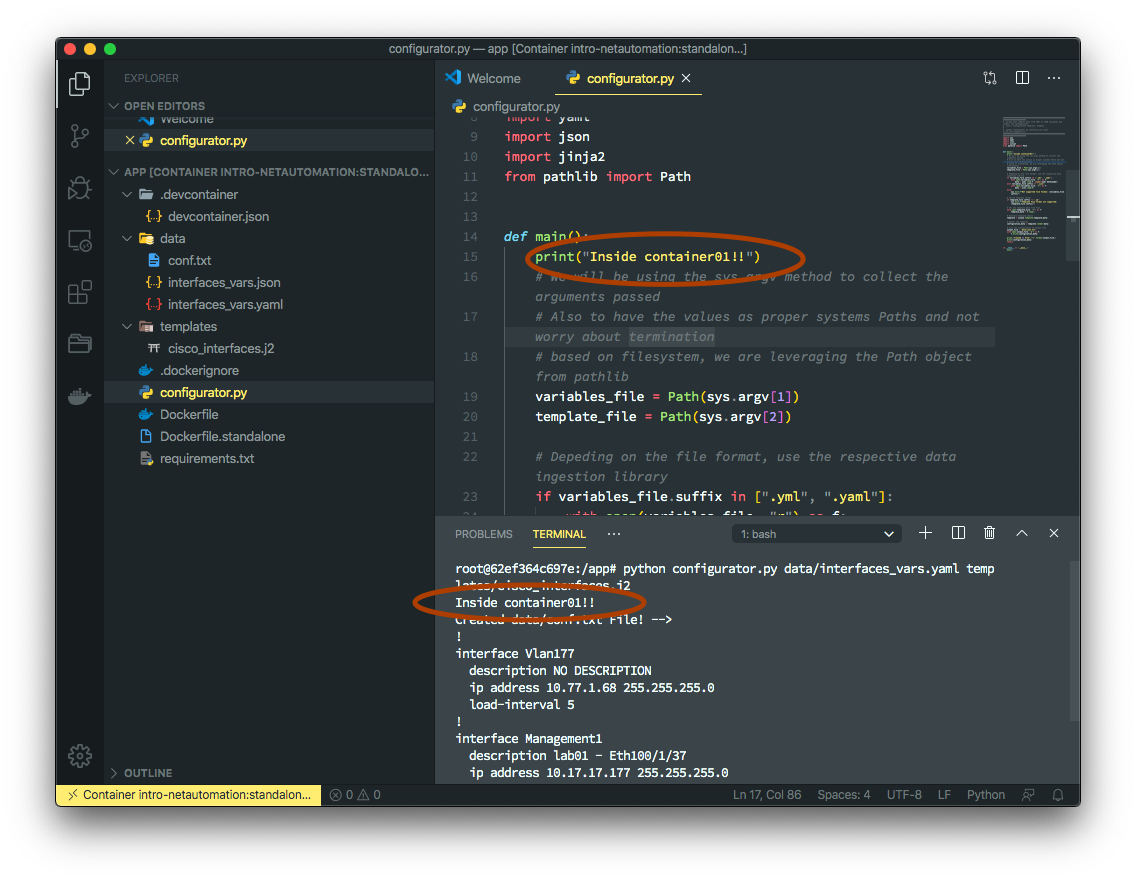 As you can see changes applied are inside the container and thus you have an isolated development environment.

It is important to note the container is ephemeral by nature, meaning that it will destroy any changes on its filesystem if the container is destroyed at a later stage. There are some advantages of doing your development inside a container:

While the above method is great for setting up a container to develop and test your code, you can go a step further by switching your entire development environment in a container-based fashion with VS Code. From the “Developing inside a Container using Visual Studio Code Remote Development” page:

A devcontainer.json file in the project tells VSCode how to access (or create) a development container with a well-defined tool and runtime stack. This container can be used to run an application or to sandbox tools, libraries, or runtimes needed for working with a codebase.

Workspace files are mounted from the local file system or copied or cloned into the container. Extensions are installed and run inside the container, where they have full access to the tools, platform, and file system. This means that you can seamlessly switch your entire development just by connecting to a different container. Boom!

This lets VS Code provide features like IntelliSense (completions), code navigation, and debugging.[1]

By using a .devcontainer we can specify what our development environment and tooling looks like, and even leverage tools like docker-compose or Kubernetes.

Within the - VS Code remote development - documentation multiple approaches are provided on how a development environment can be set up. It depends on the tooling and workflow process you may already have or you want to adopt.

Continuing with the application intro-netautomation example, let’s use the current Dockerfile to create a dev environment so it is automatically initiated by VS Code.

To achieve this some changes need to happen on the Dockerfile:

As a side note, Miniconda is a small, bootstrap version of Anaconda that includes only conda, Python, the packages they depend upon and a small number of useful packages like pip and zlib. A core benefit you will get from conda is the management of virtual environments and the ability to select different Python versions for each.

Reopen Project on a Container

On the VS Code window of the project, you can open the command palette and select the option Remote-Containers: Reopen on a container. This will open another dialog to select how you would want to build your container, from a predefined set or the Dockerfile found in your project. Let’s open with the new Dockerfile. 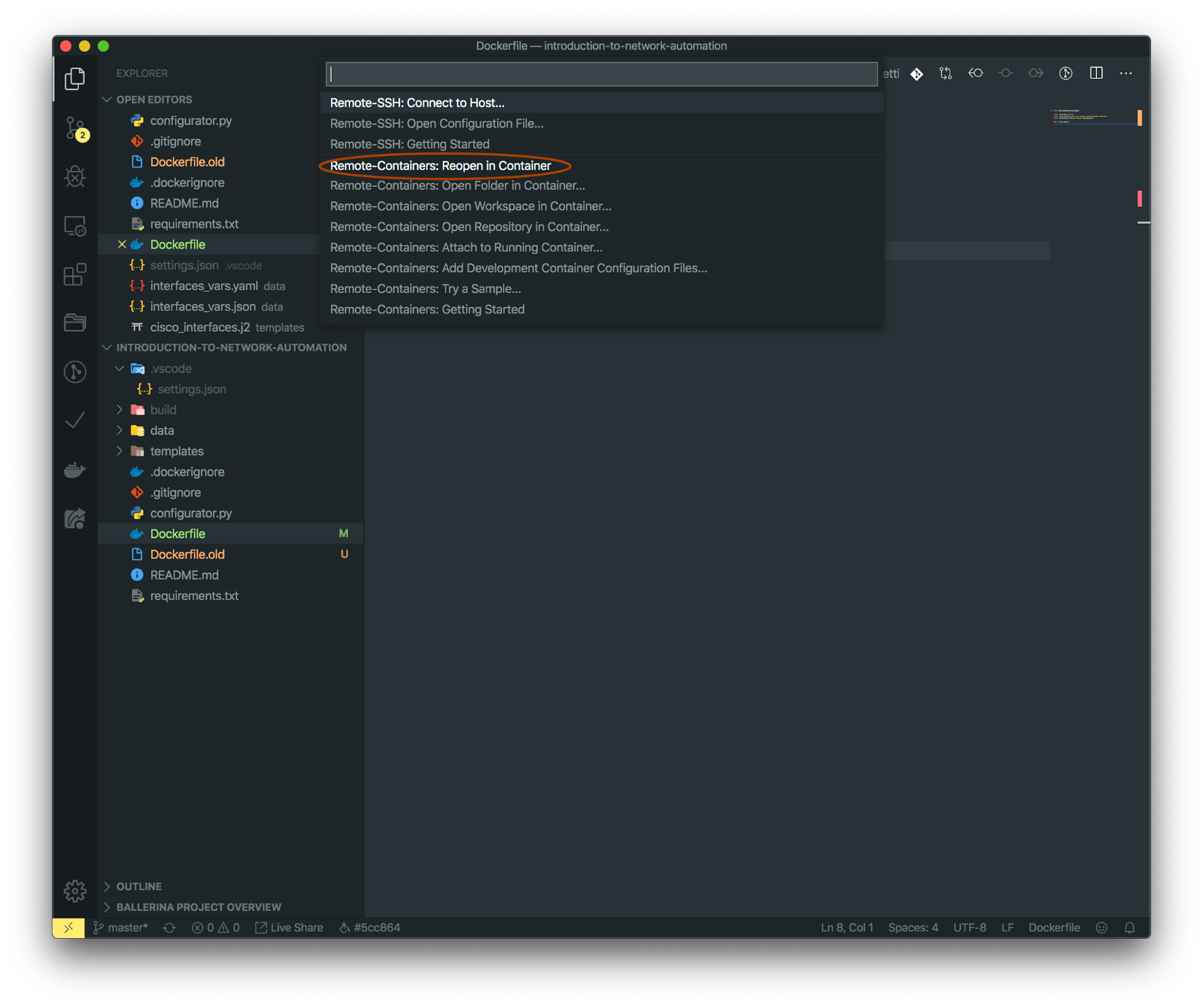 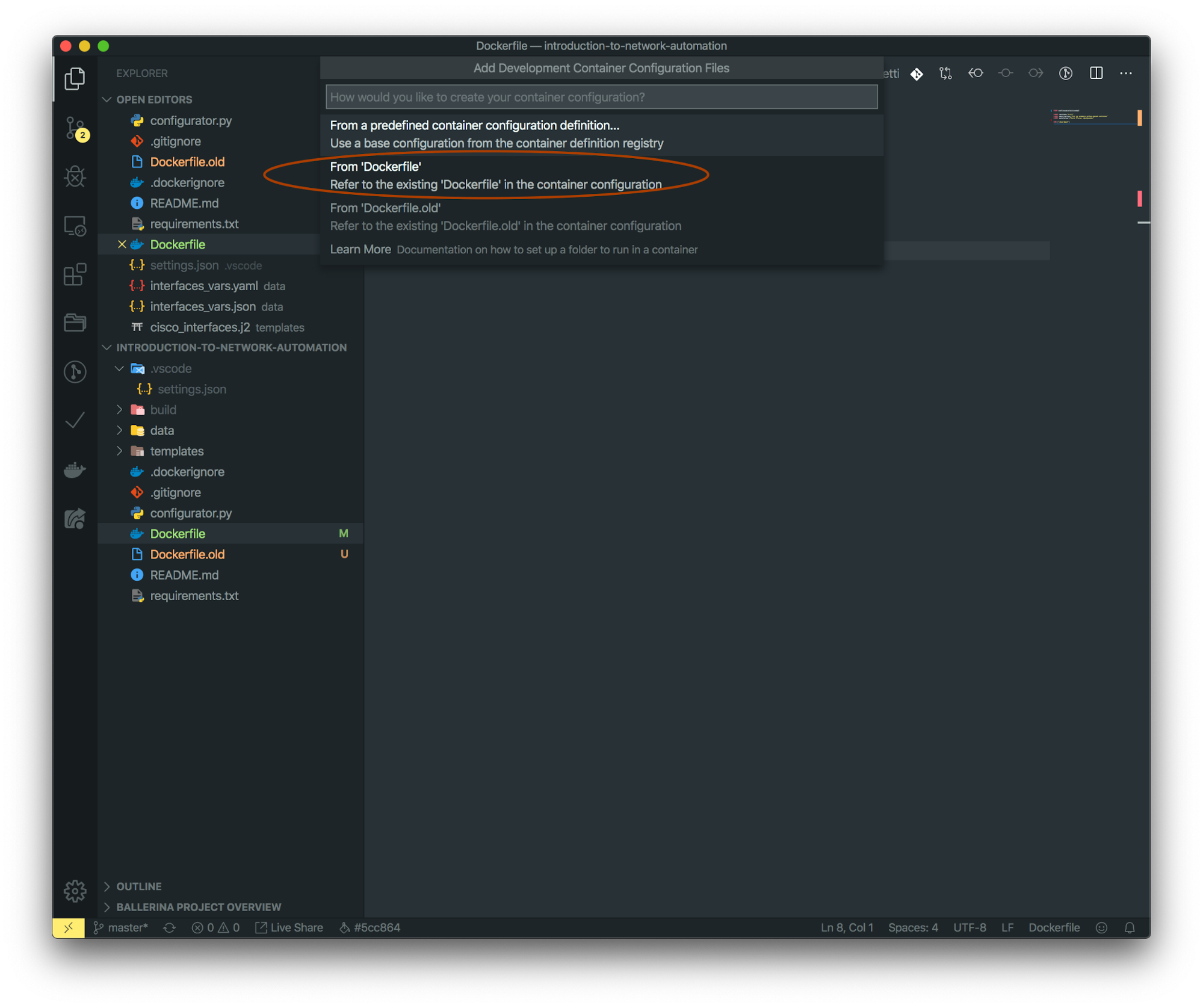 This will open a new window where you can see the details of the Docker build. It will finish with a message similar to the following. 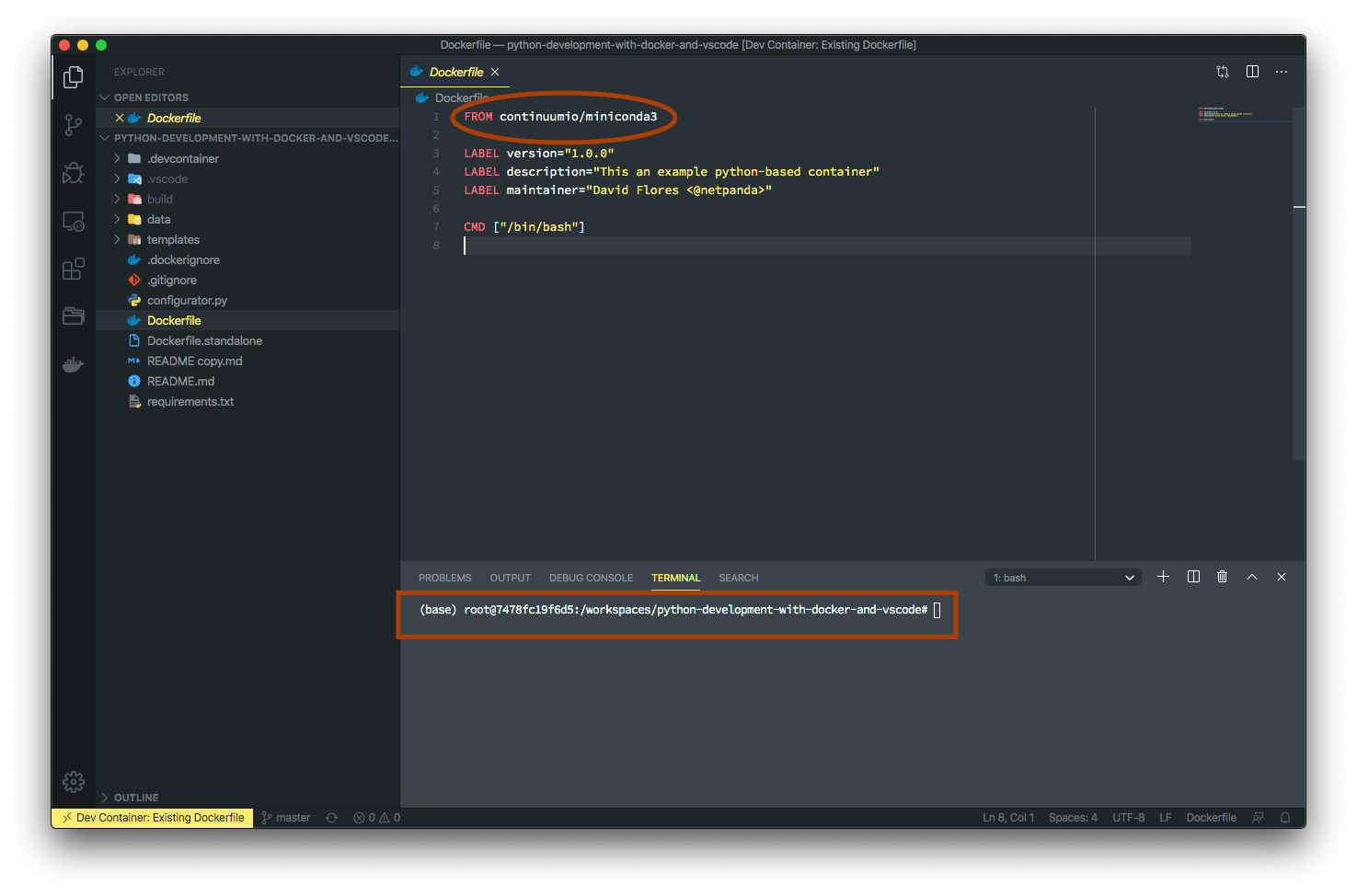 Opening a new terminal and you will be inside a shell session in the container under the project workspace, where we can run commands like pip install -r requirements.txt and mkdir build, but this can be automatically executed when the container is created via adding the requirement statements, such as postCreateCommand to devcontainer.json.

So under the .devcontainer folder, open the devcontainer.json file and modify its contents to:

Reopen the folder locally, save the changes, delete and relaunch the container from VS Code (see Managing containers). It will build the new container, install git and the Python requirements.

Now the entire development environment has been switched to a container-based approach. Here are further steps to enhance your workspace:

At the time of this writing the continuumio/miniconda3 ships with python version 3.7.3. Let’s test the application.

Open VSCode terminal, it should connect you to the container shell and inside the project workspace directory. Like so:

Great. Now let’s try something different, let's create a new virtual environment and switch to Python 3.6 and see if our application is compatible with it.

The appliance can now be run again against Python 3.6.

We have seen the benefits of having a development environment running on Docker. Such as:

Therefore it leaves me to say, that I hope you have enjoyed this article and that it helps you, as much as VSCode/Docker has me when developing.