This removes the need to run separate LAN and SAN networks, allowing both networks to be run over a single converged network. In turn, allowing you to keep the latency, security, and traffic management benefits of FC, whilst reducing the number of switches, cables, adapters required within the network - resulting in a reduction to your network TCO.

How does FCoE work?

FCoE works in the same way as native Fibre Channel, the only difference being is that it is encapsulated in an Ethernet header (rather than an FC header) so that it can be sent across the Ethernet network.

With FCoE, both the storage and data traffic is sent out of a shared physical adapter (aka CNA).

A different VLAN is used for the data and storage traffic, which is then trunked from the CNA up to the switch.

Fibre Channel is a lossless protocol, that uses buffer-to-buffer credits to ensure that frames between the initiator and the target are not lost.

However, Ethernet is not lossless and relies on upper layer protocol of the stack to deal with acknowledgments and retransmissions (i.e TCP). This meant that Ethernet enhancements were needed, and this came in the form of the IEEE Data Center Bridging standards. As Juniper states:

Data center bridging (DCB) is a set of enhancements to the IEEE 802.1 bridge specifications. DCB modifies and extends Ethernet behavior to support I/O convergence in the data center. I/O convergence includes but is not limited to the transport of Ethernet LAN traffic and Fibre Channel (FC) storage area network (SAN) traffic on the same physical Ethernet network infrastructure.[3]

PFC (IEEE 802.1 Qbb) is a link-level flow control mechanism. Though similar to Ethernet PAUSE (IEEE 802.3x) which stops all traffic on a link for a given period, PFC allows you to split traffic on a link into 8 priorities. Traffic can be independently stopped based on the priority, without having to stop the traffic on any other priority.

ETS (IEEE 802.1 Qaz) provides a mechanism for managing the bandwidth assignment to traffic classes, allowing allocation of bandwidth to the different types of traffic sharing on a converged network.[4]

DCBX is an extension to LLDP, providing the ability to discover the capabilities of DCB peers, detect misconfiguration of peers, and also configure DCB features on peers.

The maximum size of an FCoE frame is 2180bytes. To accommodate this, the network must support an MTU of up to 2.5KB (also known as baby jumbo frames).

FCoE provides additional port types to that of standard FC, they are:

The main goal of FIP is to discover and initialize FCoE capable entities connected to an Ethernet network. FIP is used to not only for initialization functions such as discovering which Fibre Channel entities are available on a layer 2 Ethernet network and the creation of virtual links, but it is also used to verify the state of the virtual links and to destroy virtual links when there is a need to do so.[7] 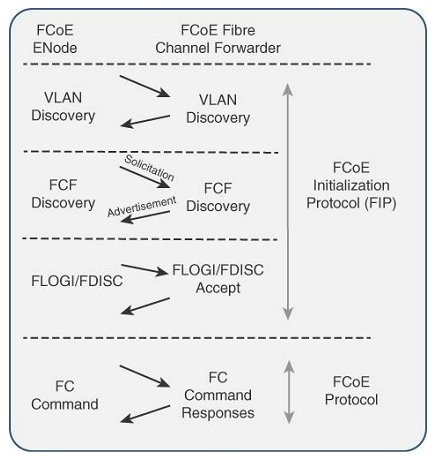 FIP snooping is required in order to prevent man in the middle types of attacks by allowing the lossless Ethernet switches to Dynamically update ACLs and only allow the ENode that performed FIP to transmit frames.[8]