What is Fibre Channel?

The FCP (Fibre Channel Protocol) operates over the FC fabric. Predominantly FCP is the implementation of SCSI over an FC network, or in other words,

SCSI data is encapsulated and transported within FC frames.[1]

When it comes to learning the various layers of Fibre Channel it is important to understand that FC does not follow the traditional OSI 7 layer model. Instead, it is broken down into 5 layers. As shown below:

FC-2 - Defines the transport mechanism of Fibre Channel and the framing rules of the data to be transferred between ports, the different mechanisms for controlling the service of classes and the means of managing the sequence of a data transfer.[4]

FC-4 - Defines the application interfaces that can execute over Fibre Channel. It specifies the mapping rules of upper layer protocols using the FC levels below.[5] 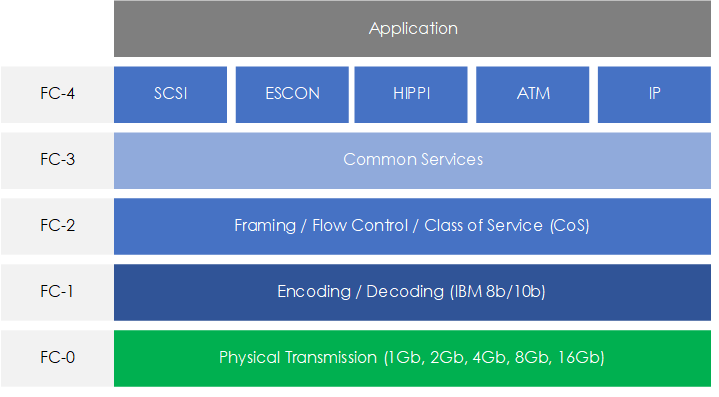 Fibre Channel defines a variable length frame consisting of 36 bytes of overhead and up to 2112 bytes of payload for a total maximum size of 2148 bytes. A Start of Frame (SOF) delimiter and End of Frame (EOF) delimiter mark the beginning and end of each Fibre Channel frame.

The CRC is used to detect transmission errors.[6] 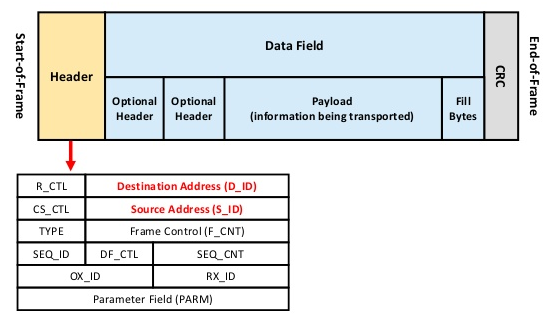 Each device in the SAN is identified by a unique WWN. The WWN contains vendor identifier field, which is defined and maintained by the IEEE.[8]

The WWN can be compared to a MAC address in the Ethernet world.

Whereas the WWN is assigned to the device. The World Wide Port Name's (WWPN) is a unique address assigned to every port of a node (be it HBA or storage system).

The World Wide Node Name (WWNN) is assigned to a node in the storage network. For example, the same WWNN can represent multiple network interfaces of a single network node.[9]

Aliases are used to aid in the configuration and troubleshooting, by mapping the World Wide name (from the FC switch or storage system) to a string. For example: the WWPN 15:00:00:f0:8c:08:95:de could be aliased to MAIL-SERVER.

Within the FC network, each switch is assigned a unique Domain ID. A principle switch is elected within the network which assigns the Domain IDs to the other switches. This Domain ID is then used to form part of the FCID, as per the FLOGI process (described later).

The Fibre Channel Name Service (FCNS) is used to exchange the FLOGI database, between switches within the fabric. Allowing each switch to learn where each WWPN is, and how to route traffic there.[10]

LUN masking is used to restrict which LUN is presented to which host or set of hosts. This prevents unauthorized hosts from accessing LUNs and also prevents situations of data corruption that could occur should a host access the wrong LUN.

When a device is connected to the fabric, it sends a Fabric Login (FLOGI) request. The switch assigns a 24-bit FCID address, which is equivalent to an IP address.

The FCID is then used by the FC switches to route traffic across the fabric.[12]

In addition, as part of this process buffer credits are also exchanged with the switch.

Once the FLOGI is complete, the initiator will send the PLOGI request to the switch, in order to inform the Fabric Name Server (FCNS) of its personality and capabilities. Such as:[13]

The initiator host will send a PLRI request to the storage target. The storage system will then granted access to the host based on its configured LUN masking.[14]

There are a number of FC port types. Below outlines the main ones:

Classes of Service (CoS)

The goal of flow control is to prevent a situation where a device receives frames faster then it can process. FC provides 2 flow control mechanisms and the mechanism used is dependent upon the service class.

Buffer-to-buffer (B2B) is used for Class 3 traffic to provide N_Port to F_Port flow control. Each N_Port begins with a credit pool, that is established during the FLOGI login. Each frame that is sent results in the credit pool is reduced by 1. Once the receiver is ready a R_RDY frame is sent and the sender's credits are replenished.

Provides N_Port to N_Port flow control and is used by Class 2 traffic. An initial credit pool is established as part of the PLOGI login. The credit pool is replenished when ACK frames are received from the target.