A question that you may be asking yourself is, does the ethernet header include a VLAN tag?

The IEEE 802.3ac standard increased the maximum Ethernet frame size from 1518 bytes to 1522 bytes to accommodate the four-byte VLAN tag. Some network devices that do not support the larger frame size will process these frames successfully but may report them as "baby giant" anomalies.[3]

Jumbo frames provide a number of benefits over the traditional - IEEE 802.3 - ethernet MTUs. These include:

Some further, more detailed explanations around the benefits of jumbo frames are also described at quora.com: 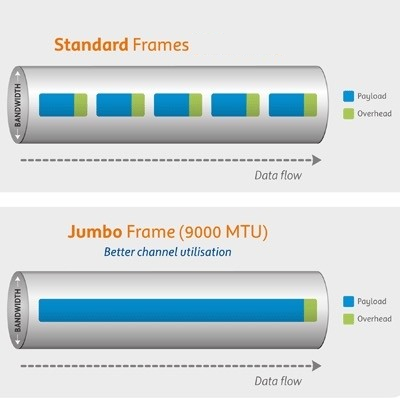 TCP MSS, the maximum segment size, is a parameter of the options field of the TCP header that specifies the largest amount of data, specified in bytes, that a computer or communications device can receive in a single TCP segment. It does not include the TCP header or the IP header.[6]

This MSS value is announced (often mistakenly called a negotiation) from both sides during the TCP 3WHS. Each side says:

I can accept TCP segments up to the size of x.

Once each side announces its MSS, the remote side is expected to send packets containing a TCP segment no larger than the announced MSS value.
Below shows an example of the MSS being announced within the 3WHS,