The controller cluster in the NSX platform is the control plane component responsible for managing the hypervisor switching and routing modules. This includes the logical switches and VXLAN overlay. Due to the centralized, decoupled model of the controller, it provides the ability to reduce broadcast traffic, in turn negating the need to configure multicast within the underlay.

Communication between the NSX Controller and ESXi hosts is performed by the User World Agent (UWA). This agent runs on the hosts as a daemon called netcpa. Furthermore, UWA is not used to manage the distributed firewall, instead, the vswd daemon is used for communication directly between the host and NSX manager (shown in Figure1). 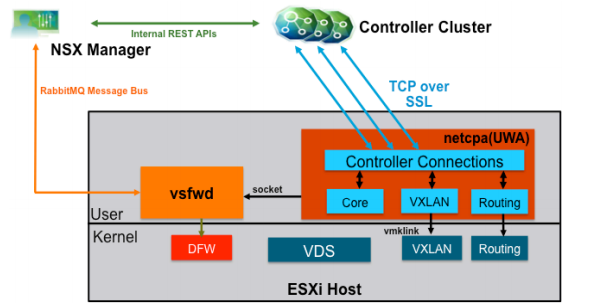