Welcome back. Now that we have an understanding of what NetDevOps is, let's dive into the components and tools that we will use to build our NetDevOps CI/CD pipeline.

Our CI/CD pipeline will be built using a number of components. Below shows an overview: 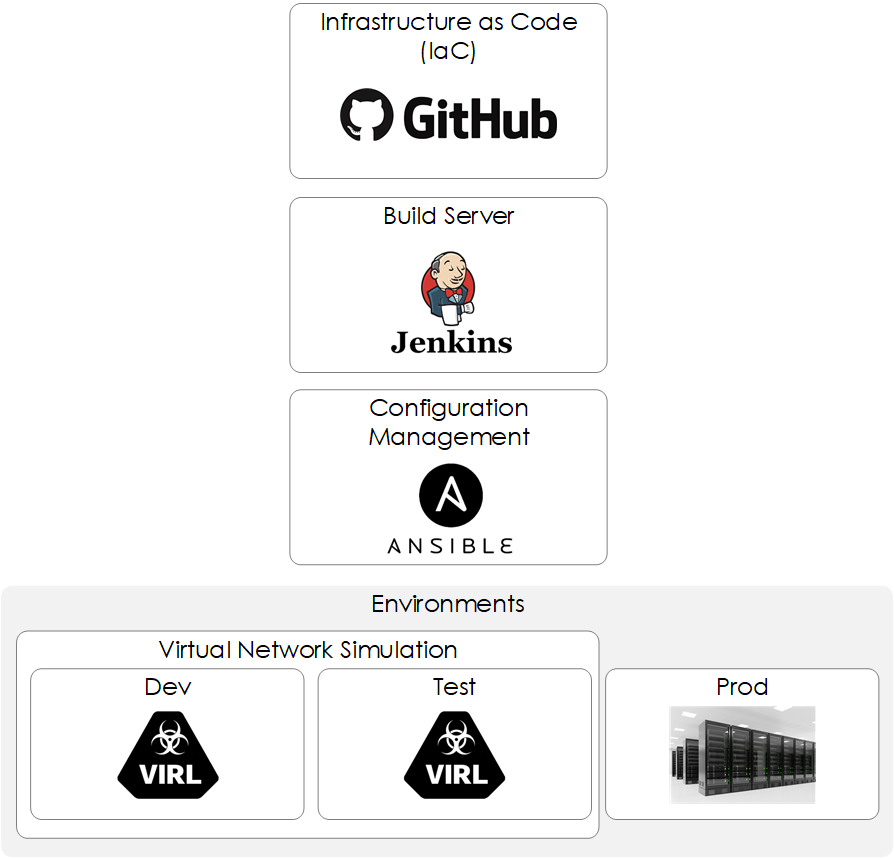 Let’s look at each one in more detail:

Github is a code hosting platform for version control and collaboration, upon which we will host our Infrastructure as Code Network as Code. Git provides the concept of branches. Feature/Dev branches are created from your master branch. Changes are then made within this feature/dev branch and then merged back into the master branch, as shown below.

Jenkins is described by its creators as,

an open-source automation server which enables developers around the world to reliably build, test, and deploy their software.[2]

However, I like to think of Jenkins as Cronjob on steroids! For example, Jenkins allows to perform actions, run scripts etc based on events that are triggered within your central source control, such as Github.

Jenkins has the concept of a Job and a Build - shown below:

Furthermore, Jenkins provides various Job types (also known as Project types), the main ones being Freestyle and Pipeline (shown below). Our example will be based upon Freestyle.

Therefore, to summarize, we will configure multiple Freestyle Projects, one for each of our pipelines.

Ansible is an agentless configuration management tool. YAML based playbooks containing tasks are configured to describe your intent, these are then run against inventory files in order to define which hosts are configured. Further details around Ansible can be found here.

We will use Ansible to configure SNMPv3 on our hosts and also use it to validate that the configuration has been applied and is working correctly. Validation will consist of polling our devices using the new SNMPv3 user and checking the response.

Our network configuration will be defined via the group_var file all.yaml. This file (as shown below) includes the various variables that we will consume within our Ansible playbooks.

VIRL is a network virtualization simulator by Cisco. Similar to the likes of GNS3 and EVE-NG. VIRL will be used to build a test network (shown below), so that we can validate our changes prior to deploying them to production. 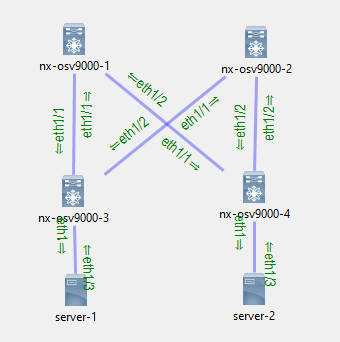 VIRL is typically managed via UI using via an application called VM Maestro. Therefore, we will use virlutils, this python package will interact with the VIRL API and provide us with a VIRL CLI (shown below) that we can consume within our pipelines.

Make is a utility used by developers when compiling/building software binaries. automatically determines which pieces of a large program need to be recompiled, and issues commands to recompile them.[3] Simplifying the logic and improving build times.

Based on the example above this Makefile allows us to compile our code by running make test this would run the test: target. This has 2 dependencies test.o and anotherTest.o. Therefore, Make would run these targets first, so that the required dependencies are created before running test.

You may be asking, Why on earth are you telling me all of this? Well, outside of compiling software Make also provides a great method for running sets of shell commands.

We will make (excuse the pun) use of Make to create a Makefile that contains the various steps required within our pipelines. Though, in essence you could write a shell script to do the same thing, I find Make quicker and it provides greater simplicity.

Let's review our Makefile, the actual file can be seen here.

If we look inside the Makefile (shown below) you will see that we:

lint, or a linter, is a tool that analyzes source code to flag programming errors, bugs, stylistic errors, and suspicious constructs.[1]

For our CI/CD pipeline we will use ansible-lint to validate our yaml files are syntactically correct. As shown below:

Note the use of +. This ensures that if any invocation returns a non-zero value exit status, then the find utility will return a non-zero exit status.[4]

One of the main errors you will see when running ansible-lint is around end of line spaces. Therefore, our pipelines will also perform a format so that the yaml files have no end of line spacing. Like so:

In part 3 of this series we will dive into each of the pipelines, their configuration, and then a final walk-through. See you there ...