Now I can say, from experience, that in my opinion one of the most frustrating admin tasks can be ACL updates on multi-tier firewall environments. Validation of the change and any troubleshooting if an ACL is still missed can be tedious and lengthy.

Therefore, I'm delighted today to bring you this 3 part series - A Hands-on Guide to Multi-Tiered Firewall Changes with Ansible and Batfish.

This guide is an introduction/beginner’s guide to both Ansible and Batfish, and how to validate your firewall changes using these tools. The steps and workflow have been written in a way that DO NOT require any fancy automation stacks, CICD pipelines or gitops foo.

Note: The code for this guide can be found within the following repo: https://github.com/rickdonato/batfish-ansible-dual-tier-fw-demo

Batfish finds errors and guarantees the correctness of planned or current network configurations. It enables safe and rapid network evolution, without the fear of outages or security breaches.[1]

Network configurations are packaged and fed to Batfish via snapshots. A snapshot being a collection of information (configuration files, routing data, up/down status of nodes and links) that represent the state of the network. Therefore, Batfish does NOT require direct access to network devices.[2] The required layout of a snapshot is based on the following key folders:

Further information can be provided to Batfish, see here. However, for the context of this article, our snapshot will consist of the above.

Batfish runs as a containerized service, from the data supplied via the snapshot, Batfish builds a series of models which are then queried either using the python SDK - pybatfish or the Batfish Ansible role. By being able to query a set of central models we can perform some extremely useful queries, such as on flows, which we will show later.

Ansible is open-source software that automates software provisioning, configuration management, and application deployment, based upon an agentless architecture. Hosts are managed by an Ansible control machine via SSH.

Over the years Ansible has become extremely popular in the world of network automation. This is down to Ansible’s,

Ansible consists of a number of components. Below details the main ones: 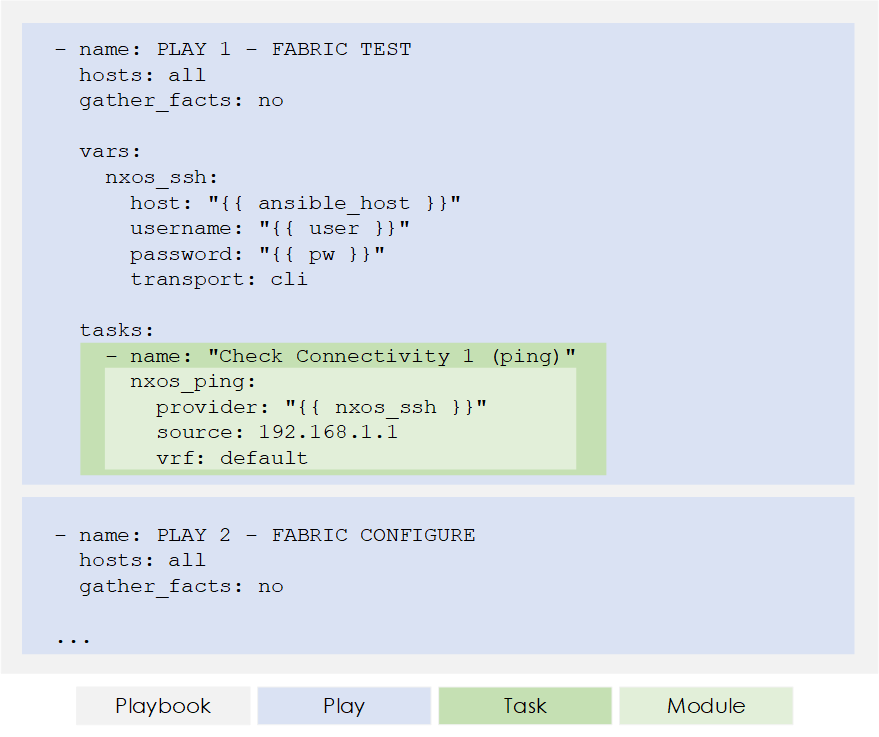 Our installation will consist of the following:

Once our installation is complete our setup will look like the below: 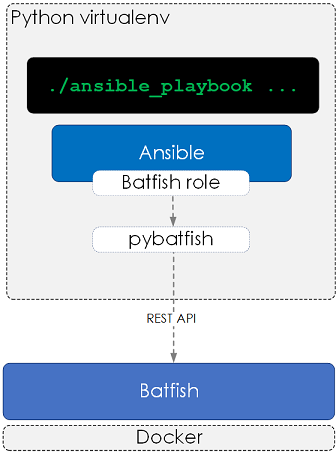 To install Batfish the following commands are run to pull down and then run our Batfish container image.

In addition to the API, the Batfish service also provides a set of Jupyter notebooks. This gives you a set of pre-baked how-to guides and scenarios so you can start kicking the tyres with minimal fuss. Also, as they are provided as Jupyter notebooks, you get additional benefits such as being able to interact with Python inline via the browser. To access this go to <your_ip>:8888. You will be asked for a token, which you can get from running the command docker logs batfish.

The installation of Ansible will consist of creating a Python virtual environment and then performing pip install … to install Ansible and the various dependency packages.Once done the Batfish role is installed.

To help you with the steps above I have put together a small Makefile. Therefore, the only commands that you will need to run are:

Note: For those of you who haven't used Makefiles before they simply allow us to bundle a number of shell commands together and run them via a single make statement. If you want to learn more, feel free to either perform a cat Makefile to see the contents or for a more detailed description of Makefile click here.

Next, we install the Ansible Batfish role, like so,

This will provide us with the following Ansible modules,

To validate that everything is installed as expected the following commands can be run:

As part of the code repo that you will have just cloned you will now have the following playbooks. We will be going through each of these later

In the next part of this 3 part series we will be looking at an example topology and also dive into the different Ansible Modules that the Batfish role provides. See you there...