There have been a number of advancements in mobile wireless communication over the last few decades, since the introduction of the first generation (1G) mobile network in the early 1980s. This evolution of mobile communication standards is a direct result of the ever increasing global demand for more subscribers and connections worldwide.

Within this article, we will look at the infrastructure and components that underpin each of these mobile technologies - from 1G all the way the upcoming 5G. By the end of this article the goal is that diagrams, like the one below, will become much more digestible! 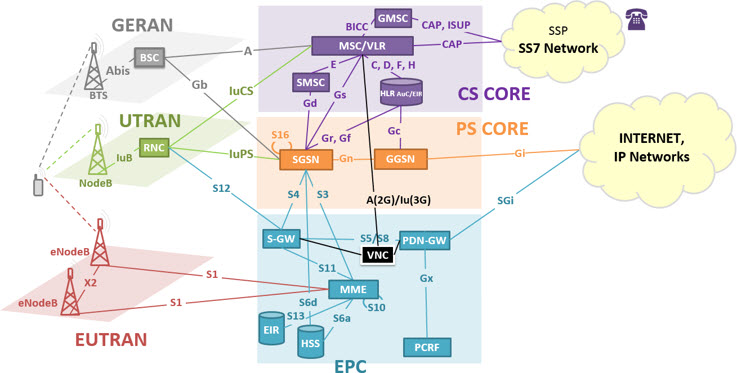 Before we begin there are 2 key terms that are important to understand with regards to learning about mobile wireless infrastructures - CS (Circuit Switching) and PS (Packet Switching).

In order to define and explain the differences of each, the following excerpt from bpastudio.csudh.edu describes it perfectly,

TCP/IP networks route data between hosts in packets and packets and packets from many hosts are interspersed on a link, this is called packet switching.
...
Packet switching can be contrasted to circuit switching in which a circuit is exclusively dedicated to a session for its duration. The telephone network is a familiar example of circuit switching. A dedicated physical circuit is established between two points from the time a call begins until it ends.

Packet switching is more efficient because the cost of the link is shared by many users. When you make a circuit-switched phone call, the line is tied up for the duration of the call whether you are talking or silent or on hold.

The advantage to circuit switching is that performance is predictable and can be guaranteed. A flood of packets from another application cannot temporarily degrade performance. The quality of service (QOS) is predictable.

In asynchronous communications like e-mail or file transfer, such fluctuations are probably not of great concern, but for applications like voice over IP (VOIP), they can cause perceivable delays and lost or garbled words. Delays are also bothersome in interactive applications where a user is waiting for a reply from a server.
...
Circuit switching has traditionally been used for telephone communication, but the trend is toward packet switching.

Introduced in the 1980s 1G was the first generation of wireless mobile communication.

1G was based upon analog signals via circuit switching technology and provided voice communication only (i.e no data).

The second generation of mobile cellular networks was launched in 1991 under the GSM (Global System for Mobile communications) standard.[1]

The key difference between with 2G (compared to 1G) is in its use of digital transmission instead of analog. This initial 2G release was mainly built for voice services with slow data transfer for SMS text messages. [2] In addition, 2G allowed for the digital encryption of phone conversations and greater wireless penetration levels thanks to greater spectrum efficiency.

The GSM infrastructure starts with the Mobile Station (MS), each containing a Subscriber Identity Module aka SIM. Through its RF antenna, it connects to the Base Transceiver Station (BTS). 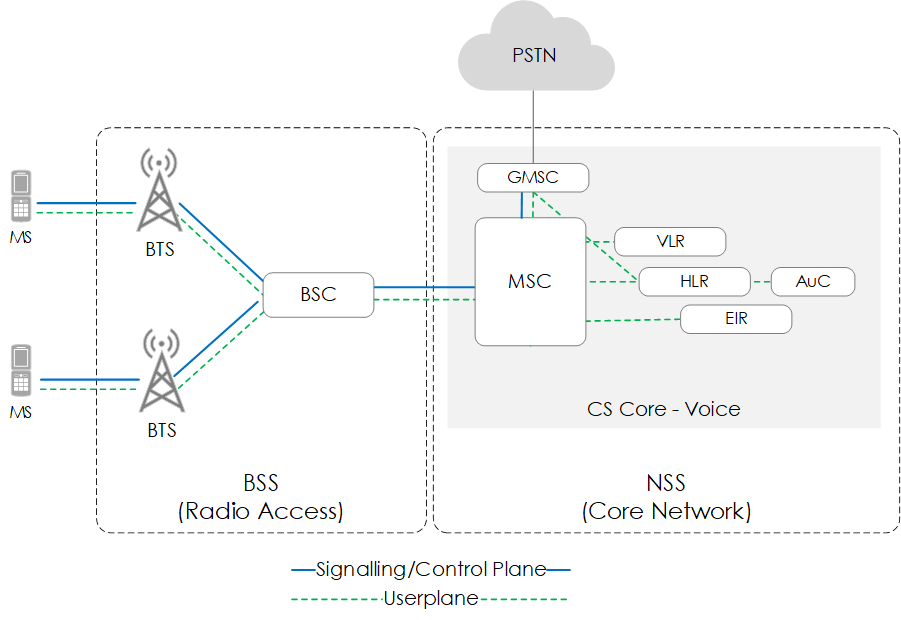 The BTS contains the radio transceivers that handles the radio link protocols from the MS. Next, we have the BSC (Base Station Controller). This manages the radio resources for one or more BTSs. It handles radio channel setup, frequency hopping, and handovers. The BSC is the connection between the mobile and the Mobile Switching Center (MSC).[3] Both the BTS and BSC form the BSS (Base Station Subsystem).

The Network switching system (NSS), the main part of which is the MSC, performs the switching of calls between the mobile and other fixed or mobile network users, as well as the management of mobile services such as authentication.[4] The NSS contains the following elements:

General Packet Radio System (GPRS) is a **packet-based **data service provided by the GSM network, that offers data rates from 56-114kbps. This combination of 2G and GPRS is usually described as 2.5G,[7] and allows for data services such as WAP, MMS and internet communication services (such as email and world wide web access).

GPRS requires some changes in both the core and radio access network (RAN). First, within the RAN to allow the BSC's to direct data traffic to the GPRS network an additional hardware module was required on the BSC, called the PCU (packet control unit). In addition, a software upgrade was also required on the BTS's.

As for the core, additional components are required aka the GSN's (GPRS Support Nodes). 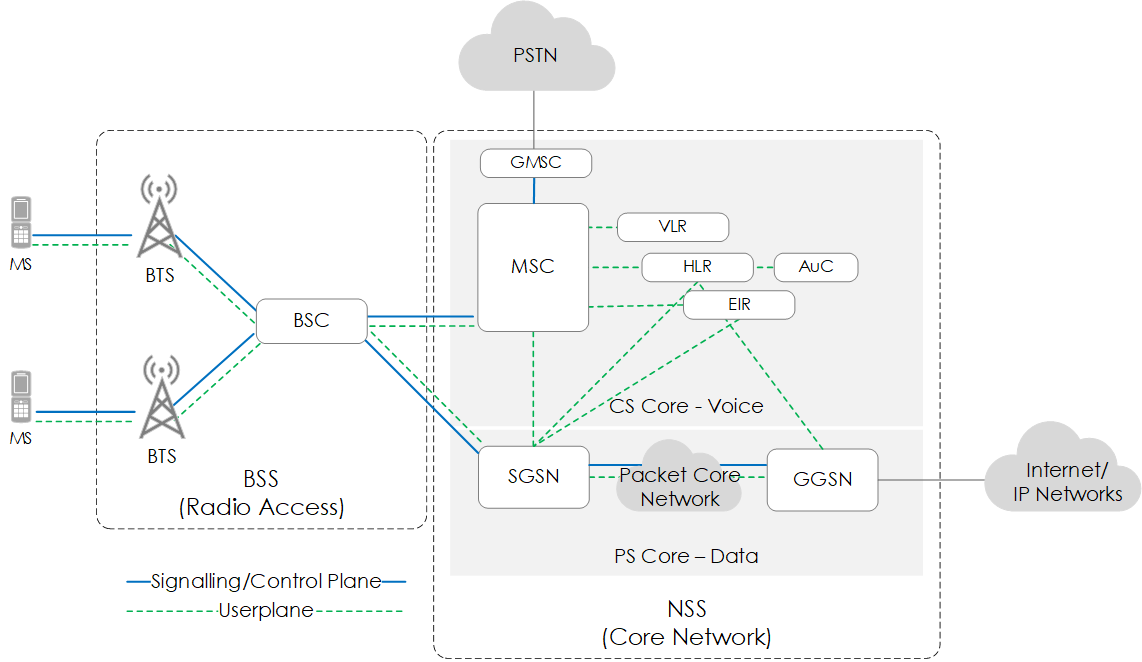 Enhanced Data rates for GSM Evolution (EDGE), also known as 2.75G, is an evolution of GPRS and provides faster data rates of up to 384kbps. These speed increases are achieved via new modulation and protocol enhancements to the existing GSM/GPRS networks. In fact no changes are needed to the existing core network infrastructure to support EDGE,[9] and only an "add-on" to the BSS is required to enable EDGE services.

Launched in 2001, and based upon the GSM standard, 3G is the third generation of mobile communications. Standardized by the 3GPP as the Universal Mobile Telecommunications System (UMTS), 3G provides faster download speeds to that of previous generations of up to 3.1Mbps. This in turn allowed for video calling and seamless streaming of video to become possible.

3G is built on top of the existing 2G infrastructure, with many of the backend components being shared. The key difference between 2G and 3G is within the RAN (Radio Access Network), which is also referred to as UTRAN (UMTS Terrestrial Radio Access Network). Here, the radio tower BTS's are replaced with NodeB's that support higher data rates together with the RNC (Radio Network Controller). One other small difference is also that the Mobile Station (MS) is referred to as the UE (User Equipment). 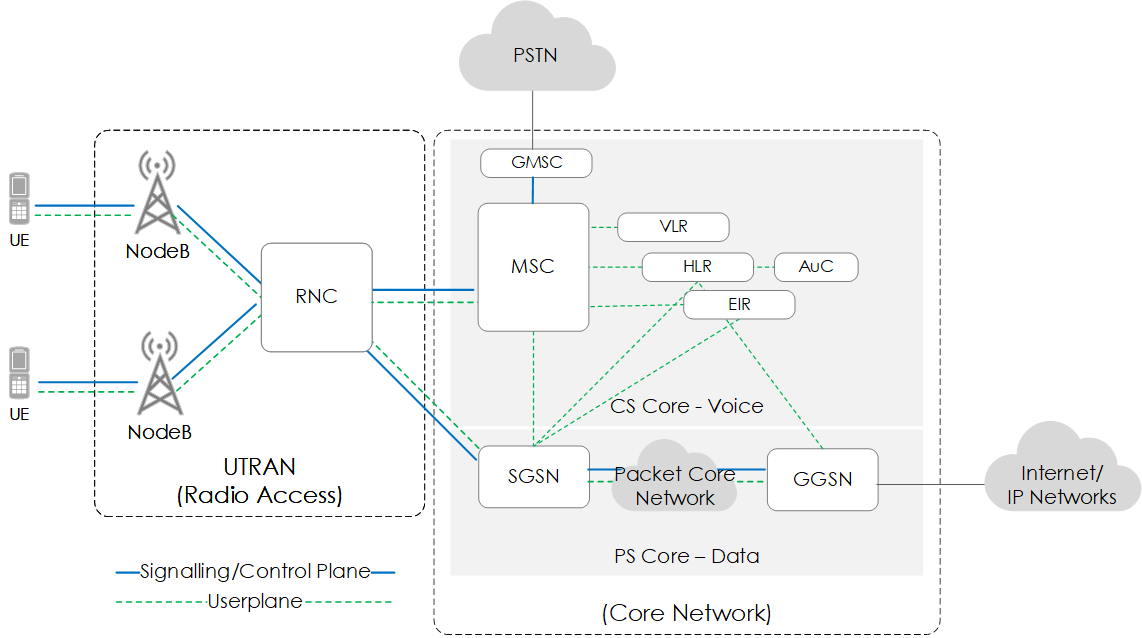 HSPA (3.75G) is based on 2 protocols - HSDPA and HSUPA. These protocols extend and improve the performance of the existing 3G telecommunications via the WCDMA protocols.

Further evolution of HSPA (3GPP release 7 onwards) saw the release of HSPA+ - aka 3.9G. This allows data rates of up to 28Mbps (download) and 11Mbps (upload)

Both HSPA/HSPA+ utilizes the same network infrastructure components of standard 3G such as the RNC's, SGSN's and GGSN's.

Initiated in 2010, the 4th generation is based completely on an IP based network system. The goal of 4G is to provide high speed, improve security, along with a lower cost of voice and data services over IP.

With 4G the infrastructure changes somewhat, both with regards to the RAN and the core. First, let us look at the 4G RAN. Traditionally, a NodeB has minimum functionality and is controlled by a Radio Network Controller (RNC). However, with an eNodeB, there is no separate controller element. This simplifies the architecture and allows lower response times.[10]

Where as 2G and 3G network architectures process and switch voice and data through two separate sub-domains: circuit-switched (CS) for voice and packet-switched (PS) for data. 4G introduces the Evolved Packet Core (EPC). EPC unifies voice and data on an Internet Protocol (IP) service architecture and voice is treated as just another IP application. [11]

The key components to the EPC are:

Voice over LTE, or VoLTE is a standard for the delivery of services (voice/sms), currently provided via Circuit Switched (2G/3G) over the Packet Switched only network of LTE, leveraging the core network IP Multimedia Subsystem (IMS).

The IP Multimedia Subsystem (IMS) is a reference architecture defined by 3GPP for delivering communication services built on the Internet Protocol (IP). Along with providing a framework for evolving from classic circuit switch (CS) to packet switch (PS) telephony.[15] 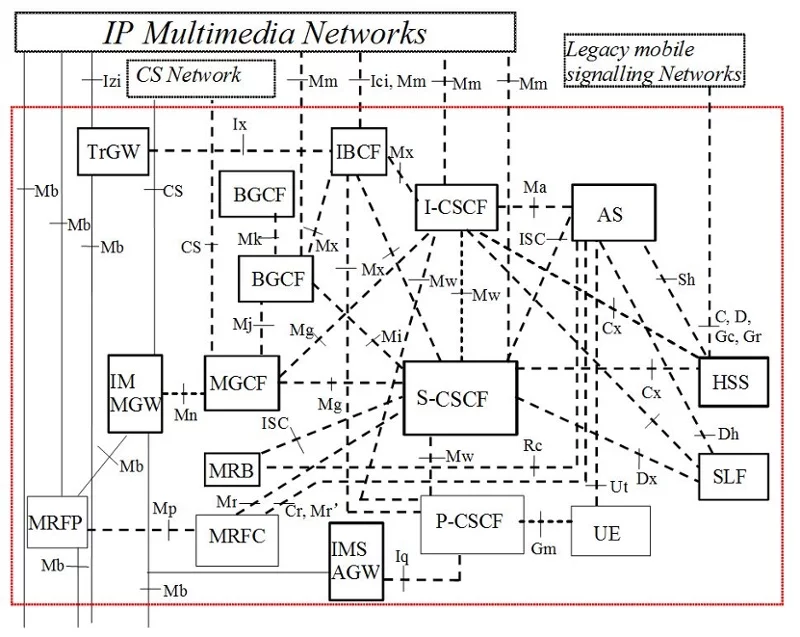 An IMS core contains many components, of which are far outside the scope of this article. However, with reference to Fig.6 below outlines the key components and connection points between the EPC and IMS:

CUPS (Control and User Plane Separation) is an important evolution within the 5G infrastructure. As the name suggests it decouples control and userplane elements seen with the 4G EPC into separate components. For example splitting the the PGW and SGW components into its user and control plane elements i.e PGW-C and PGW-U. A visual representation can be seen in the diagram below.

This provides a number of benefits, mainly, flexibility with regards to independent scaling and resource allocation to the userplane or control plane components.

The 5G core network will be based on what is called "Service-Based Architecture" (SBA), centered around services that can register themselves and subscribe to other services. All via a single SBI (Service-Based Interface) message bus that each NE connects to via its SBI.

Next, the RAN is now referred to as the Next Generation-RAN (NG-RAN) or New Radio (NR). Within the NG-RAN we have gNodeB's aka the transceivers. Due to the need for small cells, a greater number of smaller transceivers (gNodeB's) are placed to that of previous generations (2G, 3G, 4G). 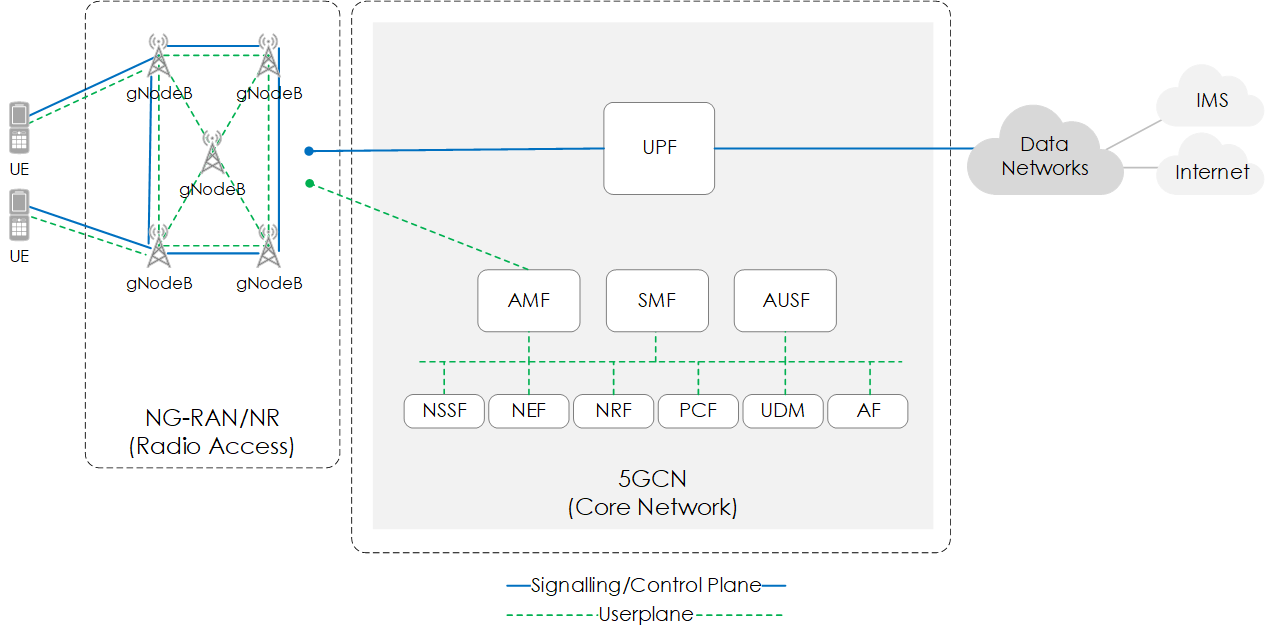 Within the Core, now named 5G Core-Network (5GCN), there are a few differences. Both with the architecture (as previously discussed ; CUPS/SOA) and its components.

Below lists each of the various components:

Should you want to learn more about any of the topics within this article, a great resource is www.tutorialspoint.com. Links to the various articles are shown below:

That concludes our Beginners Guide to Mobile Wireless Communication Infrastructure. As you will appreciate we have only scratched the surface on many of the topics. But after reading this guide I hope you now have a basic understanding that will help you on your way within the world of mobile wireless communication.